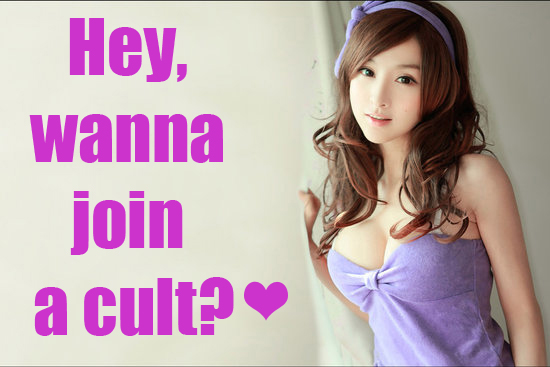 A couple of posts ago I talked about some of the crazy Buddhist cults we have all around the world. And yes, I announced that I had in fact been a part of one. Today, I’ll try and tell my story and a little bit about the group. All these events happened about a year ago.

It was late spring of 2010. My second year on the job teaching. My main concern at the time? Women. Oh, yes, I was obsessed. I could not find a loving companion to rock the casaba with. My life was not complete. Of course I had women I was interested in, the problem was they weren’t interested in me. To this day I still don’t know why, cause I’m totally awesome. Anyway, a few months prior, the school got a new cute female teacher! She was nice, energetic, and young! Oh yes, I had the eyes for this voluptuous pussycat. But, being that were in a work environment, I couldn’t really do anything about it. But one day out of the blue she actually asked me out! It was completely random! Needless to say, I was ecstatic. My first break in months. Ever since this job had started, I had seriously the worst luck with women ever, and now I was finally getting asked out by a girl. Not only a regular girl, but a girl who wasn’t afraid to take the initiative. Frickin sexy, and super rare in Japan.

They day of the big date came! She decides to come by car and picks me up. We go to a cafe in a place only accessible by car (this will come into play later). So we start a talkin’! We were talking for about five minutes before I realized that we didn’t really have anything in common, and being with her was a drag. Still wanted to get into bed with her though so I was riding it out like a trooper. That’s when she dropped the first bombshell. She had a boyfriend. Now, okay, I shouldn’t have been too upset. But really, my heart was aching. And not the kind of aching you get when you’re heartbroken. This aching was full of “What the fuck!?” and “Why am I here!?”. This is also where she makes her second and most sneaky move. She tells me that actually, she invited me out for a reason. A reason? She takes out a book and asks me what I feel about buddhism. Crap! By this point I’m already far into her trap. She then spends the next hour taking to me about buddhism, this guy named Nichiren (a Japanese buddhist prophet), and this special group that she’s part of. Here were the main selling points:

-All young people!
-You look damn good when you die!
-You will get everything you want in life!
-No bad things will ever happen to you!
-Doomsday philosophy!

The literature she showed me. It's entitled "A Japan that goes against the great sage Nichiren is doomed".

I’m quite stunned at this point. Was this actually happening to me? I couldn’t do much other than nod. All I could do was wait for the inevitable question. And when that question came all I could do was nod my head and say “Ok, I’ll try it”. Now you’re probably asking yourself why I even said yes. It’s a hard question to answer. Well not really. One, I have a hard time saying no to anything, and two, I had just realized why she had brought me to this cafe only accessible by car… crap.

Have you ever imagined what it’s like in a cult center? I feel like I had some idea from watching TV and movies my entire life, but when I was actually brought to one , I realized that it was worse than I could possible imagine. When I walked into the place it was a sensory overload. First thing I noticed was the smell. It smelled like a dank hospital. Like your dying grandma in a hospice. Not pleasant. Second, the sounds. The muffled sounds of someone yelling from a TV, applause, and crying babies. Yeah, crying babies. And third, the sights. It was a very small, darkly lit room, with people sitting around in fetal position. Needless to say, it was uncomfortable.

My hot recruiter shuffles me into another room (the previous room was more like a hallway). I was surprised to see about 60 people stuffed into a space the size of a bedroom, watching a recording of speeches made at what seemed to be a large gathering of the cult. The room was packed, but I managed to find a little bit of space to sit down. I felt like I was being watched at all times, I literally kept looking behind me just in case someone was getting ready to stab me. What can I say, it was my first time at a cult center! One strange thing I noticed was the way they clapped at the television. We were definitely watching a DVD, yet everyone in the room felt the need to clap at the end of everyones speeches like they were actually there. Yes, I clapped along as well to avoid getting stabbed. Finally, when Mr. Supreme Leader Asai Sensei got up to speak, everyone sat up and looked very attentive. He spoke about how Japan was going to be invaded by China, and how a big earthquake was coming. After all that, everyone in Japan would finally realize that this cult was the way to go. Pretty standard if you ask me. The end of the speech brought thunderous applause (still a recording, by the way).

After the speeches were done, they turned on the lights, and people started trickling out. It was now time for my initiation ceremony. After a small fee of about 6 bucks, I was given my prayer beads and prayer book. We chanted for about 20 minutes and that was it! I was officially a cultist! The woman who preformed the ceremony asked me after why I had decided to join them, I couldn’t say a thing. It was also explained to me that every time you chant (you’re supposed to twice a day), you must face towards Mt. Fuji. Islam needs to file for some copyright infringement on this shit. It was a long day, and my recruiter finally let me go home and reflect on what I had just done.

After a great deal of soul searching, I told my recruiter I was through after about a week. It took about a month to actually get her to stop trying to convince me otherwise. She even called in backup in the form of another cultist from a city about 500 miles away to try and stop me from quitting. Thinking about it, I’m lucky I got out at all.

Moral of the story, beware of hot chicks who ask you out out of the blue, they’re actually cult recruiters.

When people think of cults, Buddhists probably aren’t the first group that comes to mind. You probably think of Tom Cruise and scientology, or crazy suicide kool-aid. But there are many cults based on the facets of Buddhism all over the world. I should know, I joined one.

But before I get into my experience with crazy Buddhist cults, here are a couple of famous ones you’ve probably already heard of.

These guys are spreading around the world like wildfire. You may of received one of their pamphlets, seen one of their commercials, talked to one of their many members (including Orlando Bloom), or walked around one of their beautiful college campuses. Seems like a nice little, happy, group of Buddhist.

Their leader, Daisaku Ikeda, seems like a pretty cool dude too, except those dreams he has of taking over the cworld (he’s actually been quoted saying stuff like this).  Their members devote their lives to his word. Their main goal is the conversion of large populations of people, so they can take over and control governments. His first target? Japan! He already has a very large following there, including, yes, a political party with members in parliament. Yikes!

The Dhammakaya Movement, members in the millions

This one pretty weird. It’s based in Thailand. The central complex, the biggest buddhist temple in the world, seriously looks like giant UFO, and houses around a hundred thousand people. If that wasn’t enough, they’re currently building one that houses a million. Yes, a million fucking buddhists all in one building. Followers surround this UFO and practice elaborately choreographed nazi-like rallies. They group claims that they are are non profit, but at the same time hey actively encourage people to give thei monks money and gifts, saying it would bring them good Karma. Fucked up right? Can’t get enough? Tune into their 24 hour cable channel for all the half naked, orange robed monk you can get. Creepy as shit. 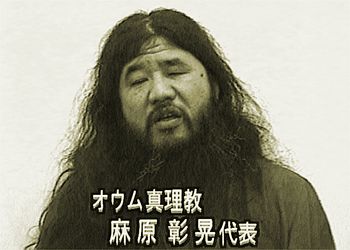 Ohhhh, Aum. Where to even begin? How could a group that gets its ideas from such a peaceful religions be so deliciously evil? Not only did they make home brood sarin gas and release it into two Japanese population centers, they’ve been linked to several assassinations of lawyers and ex-members. Yes, assassinations.

The founder, Shoko Asahara, started it off as a yoga class at his one room apartment in Tokyo. How he got from that to a 1 billion dollar net worth religious organization that wanted to destroy the world is beyond me. And don’t forget the head gear they were made to wear. They were rigged up with electrodes that were said to focus the brain waves of Asahara straight into the heads of the wearer. So who were all these people stupid enough to follow this guy? Mostly highly educated, rich professionals. Yeah, whatever. Show me that electrode hat you wore again? Yeah.. you’re a retard.

So, yes, I joined a buddhist cult. I’d say out of these three it was somewhere in the middle on the craziness scale. Anyway, I’ll get into all that next time!