Rumor has it that LeVar Burton and some unnamed organization are planning to do a Reading Rainbow themed flash mob . This is possibly the best idea ever imagined. What isn’t available, and I think everyone in their right mind wants to know, are the details of what, when, and where this thing is going down! I’m thinking that they don’t quite know exactly what they want to do yet. Of course they want it to be frickin’ awesome, but maybe the talent and ideas around LeVar are lacking. Well, if they want a great idea look no further than your trusty blogger, Maxim. I have come up with a genius Reading Rainbow flash mob idea that is surely the best ever conceived. It is kind of complicated though, so I split it up into several parts for easy understanding. In addition this plan may need police and fire department cooperation in order for everyone not to get arrested. I guess you could say it’s a bit dangerous.

The first part of my incredible flash mob is to stage a very large Nuremberg style book burning, led by a bunch of actors who happen to resemble neo-nazis. Everyone participating in this book burning will be part of the show. The mob shouldn’t be burning just any sort of books, they should all be burning children’s books. The neo-nazi actors will spur hate speech and angry anti-children book rhetoric, specifically targeting the lies that those kinds of books teach children. For example, something like how the book “Sunny With A Chance of Meatballs” lies to children about weather patterns, and consequently destroys our competitiveness in the sciences worldwide. Obviously, the bigger mob the mob, the bigger the fire and attention it will receive, so we want it to be big. I would recommend everyone bring at least 3-4 books to burn.

A woman will run on stage, grab the mic from the neo-nazi lookalikes and plead with the audience to stop what they are doing, and of course to think of the children. The grumpy neo-nazis will stage a struggle with the woman for the mic. They grab her, but before they can to take the mic out of her hands she screams one more thing: “HELP, HELP! WON’T SOMEBODY PLEASE THINK OF THE CHILDREN!” That’s his cue.

Suddenly, from large hidden speakers cleverly placed around the area, a sexy heavenly voice from above, LeVar, will say: “Did somebody say…children?” This begins the reading rainbow song. Well, not the actual song, you know, the part with the fluttering butterfly, and the nameless instrument sound thingy? The crowd will quiet and stop throwing their books. Enter the dashing LeVar Burton onto the scene. He will be riding on top of a parade float that looks like a giant rainbow with hundred of suspended books floating like butterflies. LeVar jumps off the float, backflips onto the stage, does another flip, high kicks the neo-nazi actors (who also happen to be stuntmen) and throws them into the fire, burning them alive. LeVar stands there for a while, looking like a complete badass in front of silenced crowd. He picks up the microphone from off the floor. “Don’t. Burn. Books” he says. A members from the mob scream, “Why”? He replies, “I’ll tell you why”.

Part 4: The Song and Dance

LeVar erupts into song, “Butterfly in the sky, I can go twice as high…”. A lone man from the book burning mob sings “Take a look”, another woman sings “It’s in a book” and then crowd erupts into chorus “Reading Rainbow!”. After that LeVar keeps singing and the dancing begins. I was thinking that everyone be would be part of a pre-arranged color coded rainbow team wearing pre-arranged clothing of that color. That way they could make all sorts of cool rainbow formations. I’ll leave all that to an awesome choreographer, not my specialty.

So there you have it! Truly amazing isn’t it? And nothing like this has even been done before, I can assure you. So LeVar, if you were to ever do this, it would immortalize you as the god of flash mobbing and high kicking forever, guaranteed. Just letting you know.

P.S. Fun fact- I was actually on an episode of Reading Rainbow when I was a kid, and got a chance to meet LeVar. Well, not really meet… but I did get his autograph! It was an episode on carousels, and they used the carousel around my house for the opening and ending sequence. At the end, he does his signature “See ya next time” all of us ran into the carousel and for the ending credits we’re all riding it. I got to sit one horse away from Levar. I got two or three closeups, too! Best moment of my life?

It’s no secret that the goal of this blog is to be the best. To rise to the top, tear out the hearts of all, and rape their souls until they bend a knee to its greatness. However, the path to that glorious future has alluded me…until now. It came to me in a vision at a time I needed it most. A dream if you must, but it was a glorious dream. The vision had laid before me all the characters, all the pieces I would need to earn my reign as king of comedy, song, and the world. It made so much sense I don’t know why I hadn’t thought of it earlier.

I was on a stage in front of thousands of people. They were silent. Watching me and one other. At first I didn’t know what to do. I was afraid and confused. Suddenly, my partner started singing: You are…my fire. The one…desire. I stood there silently, mind blank. The crowd was restless. Then, primal reflexes and talents began to emerge from me like a volcano erupting. I raised the microphone and began to sing: Believe…when I say… I want it that way. The crowd went wild. 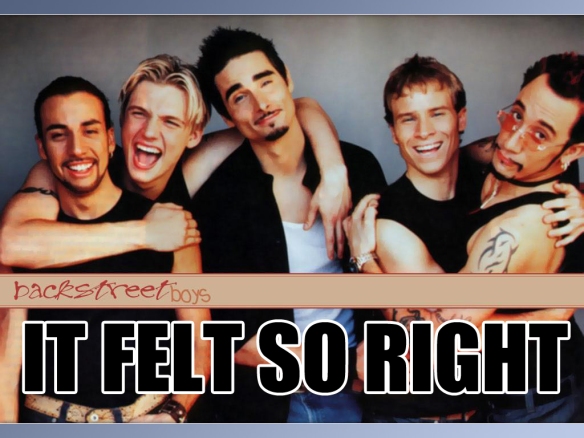 Me and my partner did an entire show. We ran into the crowd, came in and out of secret entrances, popped out where no would expected us to, blew kisses to girls, crowd surfed, did backflips. It was epic. The concert ended with an encore performance of one of the greatest songs ever written, and four simple words…Backstreets back, all right! The place exploded. It was awesome. I was a star.

After the show we were chillin’ backstage. People were coming up to me, giving me high-fives. Yeah, I was the fucking man. Then superstar Nick Cannon came in. I wasn’t surprised to see him at all. He told me that whenever I wanted, he could get me into the recording studio and we would collaborate on a record. I intended to.

The vision was clear. I must join a Backstreet Boys cover band and seek out Nick Cannon. This is my quest. I was thrown into this world with no direction and no purpose, now, not only do I have a purpose, I have a gift. I went to karaoke the other day and sang “I want it that way” just to be sure. What came out of my mouth and into my ears was like a hundred virgin angels caressing my heartstrings. This is no joke.

Now nothing can stop me from my rightful fame.

Until then, keep it fresh.