You may have seen this video making its rounds around the internet.

It’s a video of the famous Captain Planet. But the Captain Planet portrayed here is not the Captain Planet we grew up with and learned to love, this Captain Planet is a fucking impostor. This is pure propaganda by big corporations and polluters to destroy the image of the earths last defender. He’s the captain of the frickin’ planet, for gods sake. Why would you do this to him. Can’t you see that this person is just a black guy in makeup? Not convinced? Let me explain to you some things about the real green savior of the world.

Captain Planet does not fire things out of his genitalia

As much as we may imagine his package packing a punch, Captain Planet does not fire beams out of his junk. This is just ridiculous. Captain planet is blessed with the powers of all the five elements, earth, fire, wind, water, and heart. What would he need penis power for? He can make plenty of those with Earth + Fire + Water, and a little heart. With those powers combined, I’m sure he can you make you feel mighty fine if you let him.

Captain planet does does not swear

Captain planet is the embodiment of the earth’s power. He does not pollute his mouth with such foul sounds as “punkass”, “dickhole”, “bitches”, and “mother fucker”. What he does fill his mouth with, however, are gems like: “I feel like a brand new hero!”, “Next time, Planeteers, go solar. Not kaboom”, “Call me Captain Combustion, a spontaneous kinda guy”, and best of all, “Some days you’re the spider, some days you’re the fly. And it’s a fly day for me”. What a wordsmith.

This is the smoking gun. How could those stupid propagandists get such a simple Captain mannerism so wrong? Captain planet likes to give power, not receive it. Most captains would take a little bit of the power, just to try it once, but not our captain. He gives power to all the little children of the world. All of them. Like the tooth fairy, or Jesus.

Captain Planet is a good alien. He does not shoot shit out of his junk to turn humans into trees. He does not swear. And he gives a hole load of power to everyone around the world. If you can’t see through this propaganda, you’re beyond hope, and I pity you, and pray for the world. 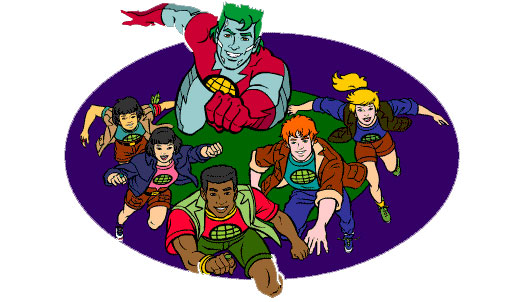