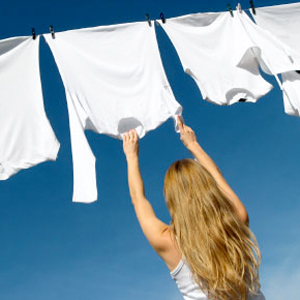 The world is full of disgusting and awful things. Turn on the TV for a few seconds and you’ll see what I mean. I live in a relatively safe part of the world. I don’t have to deal with war, and murder. I don’t have to go out on the streets and sell blowjobs to buy crack, because I am so addicted to crack. Don’t gotta decide between killing a baby for a roll of bread. I was lucky to be raised in a middle class family. I don’t have to witness terrible things. I don’t have to decide between to impossibly evil things to survive. I was safe, right? Wrong. I did something terrible the other day… I destroyed something, something beautiful. It was a gift to the world really, a beacon of light just brought into the world. It had its whole life ahead of it. My girlfriend gave it to me as a christmas present. It was a beautiful white undershirt. It’s dead now, thanks to me… and all I could do is laugh hysterically as my girlfriend kicked me.

Lack of sleep can do amazing things to the body. I hadn’t really figured this out until recently, when I had come back from my parents house in the states to Japan. My lovely girlfriend picked me up at the airport and elected to keep me awake until a decent sleeping hour so I could get over jet lag a little easier. Oh, how nice of her! When we got to my place we exchanged Christmas gifts since I had been away for a while. She got me exactly what I wanted, two very white, beautiful, fresh undershirts to replace the two I had been wearing every day for six months without washing. She wanted me to take off that shirt, I also noticed the smell and was willing to part with it…our dating world was in alignment. I tried it on immediately for my fruitful and hopefully very long relationship with this white wonder. Fit perfectly, smelled great, all was right.

It was getting later in the evening, and it was getting time for dinner. Just before this my girlfriend had woke my desperate for sleep body up from an ill-advised nap that left me in a battle between the dream world and reality. Basically, I was a mess. My girlfriend, being the sweet Japanese spy that she is, sees how deliriously tired I am and says she will go out and pick up some food for us. Hurray! Not only did she do that, she also buys us ice cream! Double hurray!

I scarf down the delicious convenience store food and soon have my eyes on the ice cream bar she had bought me. Boy, did it look good. A hard chocolate center, covered in chocolate ice cream, covered by a hard candy shell. What more could you ask for? Triple chocolate explosion. I don’t remember anything about the actual eating of the chocolate bar. All I know is that I killed it. In a haze, much like a rabid raccoon, I absorbed the chocolate bar, not taking any care to my surroundings. I was blacked out for approximately one minute and thirty-seven seconds.

I came to. My girlfriend was standing over me in shock. She was looking at something. Not at my face…she was looking lower. Around my chest. I look down. This is what I see. 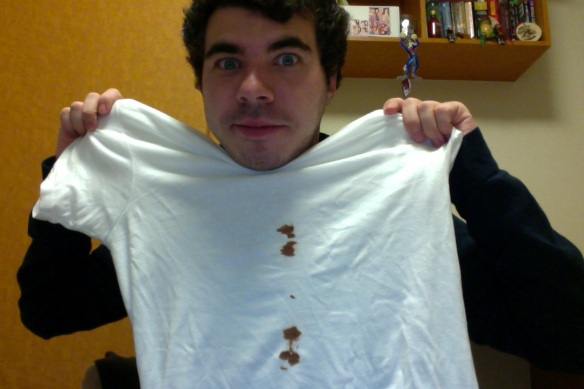 Yes, in a tired haze, while unconsciously enjoying delicious ice cream, I also managed to destroyed the beautiful new white undershirt that my girlfriend got me for Christmas. I looked at her, and the shirt, then back and her, and couldn’t stop laughing. Not a normal laugh, but the laugh of an insane sleep-deprived carny.

What a waste of life. That shirt can now never fulfill it’s purpose on this earth because of me. I basically killed a fetus. Don’t hate me. My girlfriend certainly does. At least it smells good.

Here’s to a better future for the world, where these things no longer happen.

9 thoughts on “The Death of a Newborn Shirt”